Feast of the Baptism of the Lord
One of the most popular Disney movies is “The Lion King.”  I think we’ve all seen it; I know as a kid I watched it too many times to count.  Powers did a great stage production of it last year.  Towards the end of the movie, there is a powerful scene, and I won’t be able to do justice to it here, but it’s the scene where Rafiki, the wise baboon, tells Simba, now grown and hanging out in the jungle with Timon and Pumba, that his father, Mufasa, is still alive (remember that Scar had killed Mufasa when Mufasa saved Simba).  Rafiki takes Simba to a pool, where Simba looks into the pool and sees his reflection.  Disappionted, Simba says that it’s just his reflection.  “Look harder,” Rafiki says.  And Simba looks again.  Rafiki continues, “You see, he lives in you.” 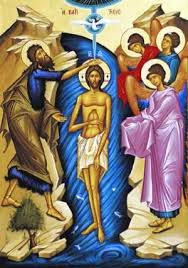 Today we celebrate the Baptism of the Lord.  Even though Jesus was already God the Father’s co-eternal Son, still, the voice of the Father is heard from the heavens, “‘You are my beloved Son; with you I am well pleased.’”  Jesus had no need to be baptized, but he still allowed St. John the Baptist to baptize him as a model for what we are to do, and to show us the reality of what happens.

When we are baptized, original sin is washed away from us, like dirt being washed away by the water.  When we are baptized, we become a member of the Church, the mystical Body of Christ, the group of those who follow Jesus’ teachings.  When we are baptized, even if we cannot hear it, the voice of the Father comes from heaven and says, “You are my beloved Son; with you I am well pleased.”  In baptism, we become sons and daughters in the Son of God.  God gives us His life, and imprints in us the identity of His Son, Jesus Christ.  That becomes who we are, and who we are meant to be.
Too often, we identify ourselves by something other than our baptism.  Maybe we identify ourselves by our work, by what we do.  Maybe we identify ourselves by our worldly successes, by how much money we make, or the home we own, or the car we drive.  Maybe we identify ourselves by our failures, by the mistakes we make, the sins we commit, the standards, realistic or unrealistic, that are set for us or that we set for ourselves.  I know that’s my Achille’s heal: to identify myself by my failures, and Lord knows there’s enough of them to think about!  But, however we think we should identify ourselves, God invites us today to identify ourselves the way He does: by our baptism.
In Baptism we are given a dignity that infinitely surpasses anything we could hope to achieve on earth.  Even if we were the most powerful, the richest, the most famous person on earth, that is nothing compared to how God sees us.  Even the weakest, poorest, most insignificant person, if baptized, is a son or daughter of God in the Son of God, and has worth beyond measure in the eyes of God.  Think about how much love God has for Jesus.  Try to imagine it!  You can’t imagine it, because God’s love for Jesus is infinite, and our finite minds could never even come close to processing how much God loves Jesus.  Now, because of baptism, that love that God the Father has for Jesus is given, freely and generously, to us.  In baptism, we are joined to Christ so that the Father sees Jesus whenever He sees us.
It is that identity that then becomes the way we should live our lives.  We don’t live a certain way to earn God’s love.  That’s foolish and a heresy (Pelagianism).  We can never earn God’s love.  If we were to live the best and holist life ever, we could still never earn God’s love.  But the identity that we receive in baptism, the identity of Christ, that calls us to live in a certain way, to live as Jesus would live, to the best of our ability.  It is supposed to be, as St. Paul says, no longer I who lives but Christ who lives in me. 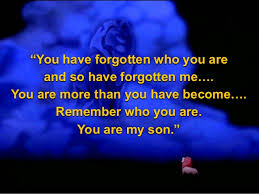 Think back to the Lion King.  Simba had grown used to living as a wart hog and a meer cat.  It was fun, it was carefree (hakuna matata!), but it wasn’t who Simba was.  Sin is often fun, it’s almost always carefree.  But it’s not who we are.  We are not our jobs.  We are not our successes.  Most importantly, we are not our failures.  Satan tries to convince us that our identity is in something other than our baptism.  Simba, though, was a lion and a king.  And it was living according to that identity that gave him true joy.  We are, in Christ, little anointed ones, little christs.  In Jesus, we are sons and daughters of God.  That identity gives us true joy, and helps us know how we are to live our life.


When we were baptized, we went from merely being our parents’ child, to being a child of God in the Son of God.  God made our identity that of His beloved Son.  That is how we should see ourselves.  That shows us how to act in life.  That is the most important thing to know about who we are.  Today the voice of the Father speaks: “‘You are my beloved Son.’”
Posted by Fr. Anthony at 11:23 AM